The PWIM uses an inductive process (in which students seek patterns and use them to identify their broader meanings and significance), as opposed to a deductive process (where meanings or rules are given, and students have to then apply them). In the PWIM, an enlarged photo with white space around it (ideally laminated so it can be used again) is first placed in the classroom; students and the teacher together label objects in the picture; students categorize and add words to their categories; students use the words in sentences that are provided as clozes (fill-in-the-blank exercises), which are then categorized and combined into paragraphs; and, finally, a title is chosen.

For example, I might use the image titled Waiting For The Plane (see below) in a unit on transportation. 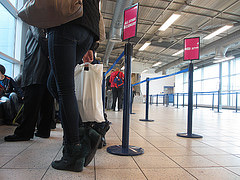 I'd first call up to students to the board and ask them to identify what English words they know in response to my question, "What's in the picture?" I'd write the letters out for each word while asking students to say each letter out loud and then would add new word labels. We might learn "backpack, sign, light, window, bag, shoes, vent, tile, ceiling." In addition, we could talk about what the people are doing ("waiting") and where they are ("airport") and identify clues that would lead us to those words.

Students would then return to their sites and copy the words on to reproduced copies of the image. Then, on that day or the next, they would identify categories for the words (parts of a building, having the "i" vowel, etc.) and, using a dictionary, add several new words to each category.

On the following day, students would complete a series of clozes (or "fill-in-the-blanks") using words to describe the image. For example, here is one of perhaps ten sentences I would use for this image. Students would choose which two of the four options would go in the blank:

Students would then categorize the sentences and add new ones to those categorize that would accurately describe the photo.
On the next day, students would turn sentences in each category into paragraphs. Depending on the English level of students, they could add topic sentences, introductions and conclusions.

Finally, the class would brainstorm potential titles for their essays.

The PWIM process can easily be used as the centerpiece for many classroom activities during the year. Each week, a different photo can be connected to an appropriate theme (food, sports, house, and so on), and the instructional process can be made increasingly sophisticated and challenging for students—for example, later the cloze sentences can have multiple blanks in each and not have words written below them for students to choose. The pictures themselves can be personalized. Local images and ones featuring students could be used. For example, in addition to using a house as the central photo for the class, each student can bring a picture of their own house that they can use for supplementary vocabulary instruction. Students can snap the photos with their cell phone for the teacher to print out, or, with advanced planning, an inexpensive disposable camera can be used by the entire class. Photos can also easily be found on the Web. The best pictures to use in this activity contain one scene with many different objects and generally include people.
Of course, some themes will take more than one week and/or will require more than one picture. A unit on food, for example, could include separate subunits on healthy eating, eating at a restaurant, shopping at a store, farm life (both as a grower and as a laborer), fruit, vegetables, meat, and dairy.

The PWIM is a literacy instructional strategy that was designed for early literacy instruction and has also been found to be exceptionally effective with both younger and older second-language learners. It was developed by Emily Calhoun, and some studies have found its use resulting in literacy gains of twice the average student, and as great as eight times the average gain for previously low-performing students. It takes advantage of student prior knowledge and visual clues and builds on the key strength of inductive learning—the brain’s natural desire to seek out and remember patterns.

In addition, a related reinforcing lesson to the PWIM is having students create "Picture Data Sets" online. Using the categories they have chosen for that week's classroom picture, students can grab images off the Web or upload their own photos of items that fit into those same categories (for example, "words that begin with r,""vegetables," "transportation," etc.) . These photos can either illustrate words they have already identified in class or new ones, and then can label them with words or sentences. They could also mix-up their images, list the names of categories, and challenge other students to organize them correctly. There are several easy and free online tools that allow students to easily "mix and match" images for these kinds of activities and you can find a list of them here.

Larry Ferlazzo teaches English and Social Studies at Luther Burbank High School in Sacramento, California. He has written six books on education, writes a teacher advice blog for Education Week Teacher, and has his own popular resource-sharing blog. He writes a weekly post for the New York Times on teaching English Language Learners. Portions of this post were adapted from the book, The ESL/ELL Teacher's Survival Guide, co-written by Katie Hull Sypnieski and Larry.